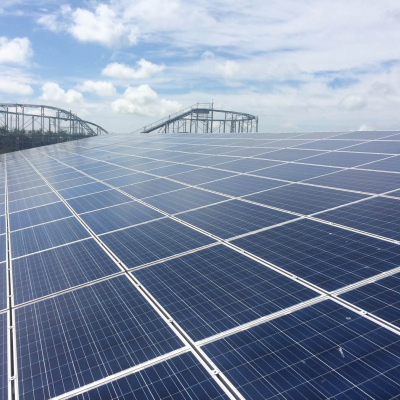 Over the last year we have installed two environmentally friendly biomas boilers and covered two of our massive roofs with solar panels. We estimate that approximately 75% of our energy usage is now totally renewable and carbon neutral.

In 2015 we installed 130 KW of solar panels on 2 of our roofs, this solar power is running the entire site on a daily basis and over a 12 month period it has will cut our grid electric usage by around 60%.

There are 300 panels on one roof and 231 panels on the other, at peak efficiency each panel produces a maximum of 235 watts of electric, this then travels to our five control panels and is distributed around the site.

During 2014 we installed two 60 KW biomass boilers that work alongside each other to produce enough hot water to heat nearly half of the site. For winter 2016 we are adding two more boilers than will heat most of the remainder of the site.

The boilers use wood pellets that are made from wood waste, the pellets are automatically fed by auger from the hopper into the boiler. The pellets are designed for maximum output with minimum waste, so there is very little ash left after each heating cycle, this means there is hardly any maintenance or cleaning and the system is very efficient. Burning biomass, such as wood pellets, emits the same amount of carbon dioxide as is absorbed while the plants were growing. Therefore, biomass is classed as carbon-neutral renewable energy.

The biomass boiler was originally going to be installed to heat our new Little Stars play area and restaurant but with a little more research it was decided that we would install a bigger unit to heat some of the rest of the Milky Way. We are estimating that we will cut our gas and electric usage for heating in the Milky Way by over 60%.