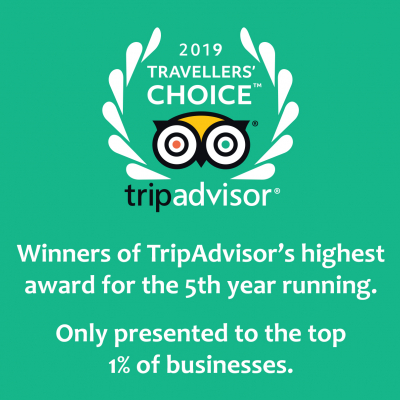 TripAdvisor has named The Milky Way as the 2nd best Amusement Park in the UK, according to its reviewers - and awarded us the highly coveted Travelers’ Choice™ award for the 5th year in a row.

TripAdvisor has placed the Milky Way at #2 in its list of the Best Amusement Parks in the UK - as a result of our high rate of excellent reviews from the public. Our family-run park has been placed just below Paulton Park, but above big names such as Alton Towers and Blackpool Pleasure Beach.

We've also been awarded TripAdvisor’s most prestigious accolade for the 5th year running – the Travellers’ Choice™ award. This award is the highest honour TripAdvisor can give and is presented annually to the top 1% of businesses across select categories.

“We’re thrilled to again be recognised as one of the best days out in the country,” says partner Tara Stanbury. “The list highlights those parks that offer high levels of visitor satisfaction, and a great-value day out, so it’s fantastic to be included.”

91% of people who review The Milky Way on TripAdvisor rate us as Very Good or Excellent – a statistic which puts us head and shoulders above most. Google sytatistics also show that visitots stay at The Milky Way for 5.5 hours on average - longer than any other family attraction in the area.

“We’re different to some of the others on the list – a bit smaller, and we don’t have the white-knuckle rides and huge crowds and queues. But we do constantly work on being the best we can be, and are always adding something new,” says Tara.

“We really focus on having friendly, helpful staff and a providing a good family day out – and we’re so pleased that our visitors on Trip Advisor think we’ve done a good job of this.”

When deciding on the awards TripAdvisor takes into account the quantity and quality of reviews and ratings for amusement parks worldwide, gathered over a 12-month period.